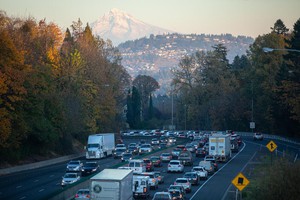 Globally, thousands of jurisdictions have declared climate emergencies, acknowledging their cities are in the midst of an environmental crisis and often committing to a series of steps the government hopes will mitigate the catastrophic impacts.

On Tuesday evening, Portland joined this list. The council unanimously passed a resolution declaring the city – along with the rest of the globe – was confronting a crisis:

“The Portland City Council declares that a human-made climate emergency threatens our city, our region, our state, our nation, humanity, and the natural world, and that such an emergency calls for an immediate mobilization effort initiating greater action, resources, and collaboration that prioritizes frontline communities to restore a safe climate,” read the resolution.

Hours earlier, this resolution would have placed council members in the uncomfortable position of advocating for policies to mitigate climate change, while simultaneously supporting a freeway widening project that climate activists have argued will increase traffic and worsen emissions. But on Tuesday afternoon, the Albina Vision Trust, an organization that wants to re-establish the historically Black neighborhood in the Lower Albina area, pulled its support from the project. And Wheeler and Eudaly soon followed suit.

“If we care about the future of [our] city and our climate, the choice is clear. Freeways expansions are not the path forward,” Eudaly said Tuesday evening,

The commissioner said she believed the city needed to do a better job managing demand on freeways before expanding them. She introduced a change to the declaration that asked any future traffic management strategy, such as congestion pricing, be “implemented equitably and in close collaboration with BIPOC communities.”

In his introductory remarks, Wheeler said he too was in support of these strategies.

“ODOT has not met our goals around community and economic development or climate,” said Wheeler. “And going forward I will look forward to collaborating with transportation Commissioner Eudaly to prioritize congestion pricing strategies for our existing freeways within Portland.”

The resolution emphasizes that certain vulnerable communities — such as communities of color, immigrants, refugees, low-income individuals, workers, people living with disabilities, and people experiencing homelessness — are on the frontlines of the climate emergency and will be disproportionately burdened by the crisis.

“The people from frontline communities have the fewest opportunities to change or benefit from the systems that impact them, including an economy that is built off slavery, colonialism, and the unsustainable extraction of natural resources,” reads the resolution. “And they must be the ones that benefit first from the transition to a clean energy economy and be able to lead the planning and implementation efforts to address climate change.”

The resolution passed by council includes more than 30 commitments. Here are five notable ones:

1. The city’s adopting a new target for carbon emissions. By 2030, the city is aiming to be 50% below what the region’s emissions level were in the 1990s.

Multnomah County Chair Deborah Kafoury, who spoke Tuesday, said that carbon emissions across Multnomah County are now at 19% below the levels in the 90’s, but that emissions reductions had plateaued in recent years.

The city has committed to be at net-zero carbon emissions by 2050.

A lack of trees means the impacts of climate change are felt disproportionately by residents of east Portland. Hot days will feel hotter, and the area’s more vulnerable to flooding.

3. The city’s committing to work with TriMet and Metro to fund free year-round transit passes for Portlanders 18 years old and younger.

Metro is already considering paying for passes for high school students who don’t get the passes through their school, the Oregonian/OregonLive reported earlier this month. That money would come from the transportation package the council is considering referring to the November ballot.

4. The resolution asks Portland General Electric and PacifiCorp, two electric utilities, to deliver renewable energy to all Portland residents and businesses by 2030.

This is a loftier goal than what had previously been set for the utilities. Two years ago, Multnomah County passed a resolution that created a goal of meeting all of the county’s energy needs with renewable sources by 2050.

5. The city says it will pursue “partnerships” with schools and youth organizations, including Portland Public Schools, to create a “youth-led summit” to support climate action. This is supposed to take place virtually in the fall.

The city’s bureau of planning and sustainability plans to return to City Council in early 2021 with a progress update on the commitments made in the resolution.