A couple of days ago on 29 July was 2019’s Earth Overshoot Day, marking the date when humanity’s demand for ecological resources and services in a given year exceeds what Earth can regenerate in that year. We maintain this deficit by liquidating stocks of ecological resources and accumulating waste, primarily carbon dioxide in the atmosphere. Earth Overshoot Day is hosted and calculated by Global Footprint Network, an international research organization that provides decision-makers with a menu of tools to help the human economy operate within Earth’s ecological limits. 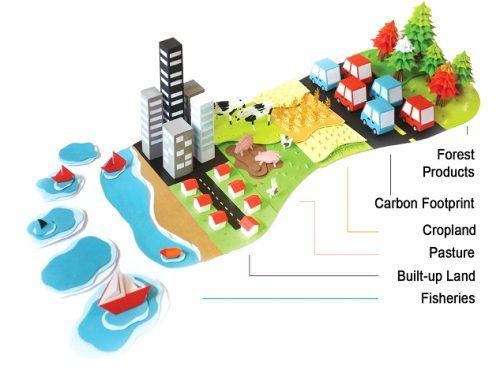 To determine the date of Earth Overshoot Day for each year, Global Footprint Network calculates the number of days of that year that Earth’s biocapacity suffices to provide for humanity’s Ecological Footprint. The remainder of the year corresponds to global overshoot. Earth Overshoot Day is computed by dividing the planet’s biocapacity (the amount of ecological resources Earth is able to generate that year), by humanity’s Ecological Footprint (humanity’s demand for that year), and multiplying by 365, the number of days in a year:

Just as a bank statement tracks income against expenditures, Global Footprint Network measures a population’s demand for and ecosystems’ supply of resources and services. These calculations then serve as the foundation for calculating Earth Overshoot Day.

On the supply side, a city, state, or nation’s biocapacity represents its biologically productive land and sea area, including forest lands, grazing lands, cropland, fishing grounds, and built-up land.

On the demand side, the Ecological Footprintmeasures a population’s demand for plant-based food and fiber products, livestock and fish products, timber and other forest products, space for urban infrastructure, and forest to absorb its carbon dioxide emissions from fossil fuels.

Both measures are expressed in global hectares—globally comparable, standardized hectares with world average productivity. A hectare is equivalent to 10,000 square meters or 2.47 acres

Thank you to the One Planet Education Network for sharing this information.