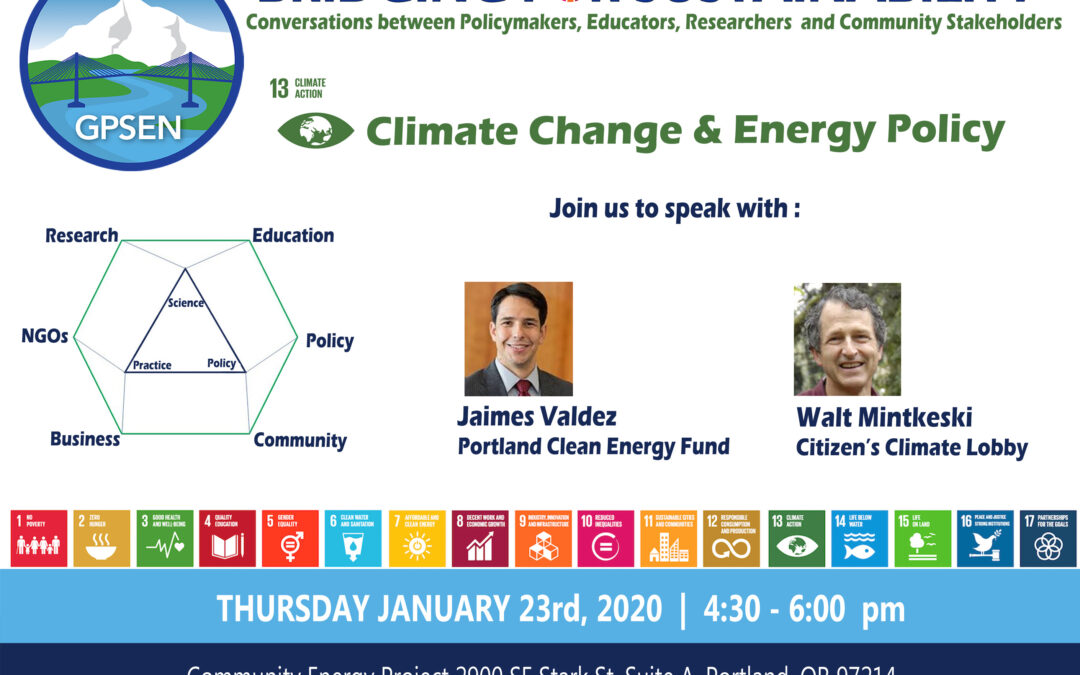 Bridging for Sustainability’s kick-off event on January 23rd, 2020 found 30+ individuals from varying backgrounds in attendance. Each participant brought something unique to the session, lending their individual perspective to the pertinent conversations at hand. While from different educational and professional backgrounds, each person shared at least one thing in common: a desire to promote climate justice  and combat rampant and inequitable climate change. The UN’s Sustainable Development Goal #13 (Climate Action) set the pace for the evening, guiding our conversations and providing a framework from which dialogue and action evolved.

SDG 13 served as a guide for the formulation of this session. This goal emphasizes the climate crisis that our planet is experiencing, specifically shining light on how it will affect the human race long-term. It specifies that while our efforts to combat this crisis are admirable, the progress we are currently making is not enough. In order to preserve the sanctity of this planet, and our race as a whole, more radical initiatives need to be implemented. With this need in mind, the first Session of Bridging for Sustainability focused our collective efforts around discussions of what is being done now (both locally and nationally), what impact this will have long-term, and what future steps can be made. Future accomplishments will require partnerships between varying organizations, all grounded in the disciplines of science, practice, and policy. The below graphic demonstrates these interrelationships: 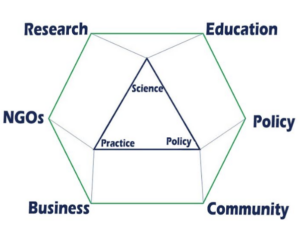 The session started with brief introductions, familiarizing everyone with the breadth of knowledge present in the room, and the work that people were already accomplishing. We had the two presenters: James Valdez, representing the Portland Clean Energy Fund, and Walt Mintkeski, representing the Citizens’ Climate Lobby (CCL).

James’ presentation lead us through a brief and fascinating story on how the Portland Clean Energy Fund came about, before getting into the details of the fund itself. The Portland Clean Energy Fund began in 2018, being the culmination of many years of work by varying organizations. Developers of the fund realized that the tools and resources to combat climate change were disproportionately dispersed throughout the community. Namely, low-income individuals, particularly people of color, historically have not been granted the ability to combat systemic climate change. This is further exacerbated by the fact that this demographic of people endure the harshest impacts of the climate crisis and might even endure further inequality as we shift toward renewable energy. From this need, the Portland Clean Energy Fund was established, with the specific goal of funding programs and projects with a racial equity lens.

The Portland Clean Energy fund is funded by a 1% tax that is levied against all corporations in the Portland metro area that make more than 1 billion a year in revenue. 95% of all garnered funds are directly applied to local projects and programs. The programs that receive funding range from the following impact areas:

Access to this funding is restricted to non-profit organizations. Applications are reviewed by a 9 person committee, who forward all approved grant applications to City Council for review. The fund is expected to issue its first round of financing in the Summer of 2020.

A review of climate justice initiatives in other west coast cities highlights the unique nature of the Portland Clean Energy Fund. While varying cities have set their own goals of reducing their carbon footprint, Portland Clean Energy Fund stands out as a unique program on the west coast. The distinctness of the fund lives in the fact that its establishment was propelled by community members working closely with organizations to get a measure on the ballot. This Fund is illustrative of the values of the Portland community, and reflects this city’s dedication to combating the climate crisis equitably.

The conversation on climate change, renewable energy and equitable access shifted naturally to the work of grass-roots organization Citizen’s Climate Lobby (CCL) focusing on national policy to combat climate change. Walt Mintkeski, representing the CCL, highlighted more about CCLs work. The goal of this organization is to pass legislation, named Carbon Fee and Dividend Policy, that levies a fee on carbon, with the goal of slowly shifting the American economic system away from its reliance on planet destroying fossil fuels. Currently, the CCL has over 120,000 supporters, spread between more than 500 US Chapters.

The fee is levied when the carbon is ‘taken out of the ground’. Rather, the fee is front-loaded, charging corporations for carbon harvesting rather than other models which focus on carbon production. The fee that is collected is then returned to the American public, providing citizens with a subsidy to their income.

With systematic change in mind, the Carbon Fee and Dividend Policy legislation is being proposed to ultimately raise the price of goods that are produced through the use of carbon. As these products gradually get more and more expensive, the American public will shift towards consumption of the now cheaper sustainable products. This model allows for the gradual cultural shift towards a more sustainable, planet-friendly products, ultimately resulting in the shift towards a green-energy economy.

The ultimate goal of this legislation is to bring down carbon emissions by 40% within the next 12 years. This will be accomplished by the Carbon fee mentioned above, which will slowly increase each year, continually reducing the appeal of carbon based products. The Citizen’s Climate Lobby plans to achieve this with a 5 point model

CCL believes that this model will achieve their goal, and help to keep Earth habitable for us all.

After the presentations concluded, the room was divided into 3 groups and given the task of creating mind maps to brainstorm around questions generated by the panelists. The goal of this activity was to harness the creative energy of all the individuals present, with the hope of garnering collective input on pertinent climate based issues, build shared understanding, leverage collective intelligence and generate new ideas for policy change. The results of this collaborative effort are demonstrated below: 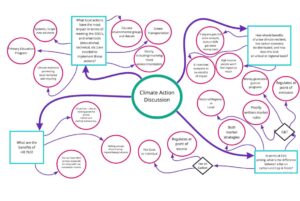 These mind maps represent the vast breadth of knowledge present in the room, and led to an insightful conversation on the impact that these issues have on our community, and world, as a whole.

Through fostering partnerships, encouraging community input, and cultivating an environment of collaboration, Bridging for Sustainability’s flagship event allowed each participant to engage in animated conversation centered on SDG #13. With the outpouring of community interest/support being robust, Bridging for Sustainability looks forward towards the continuation of this series with excitement. 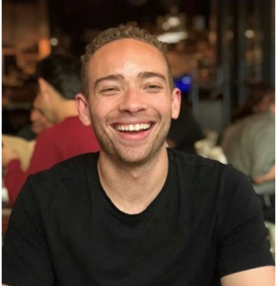