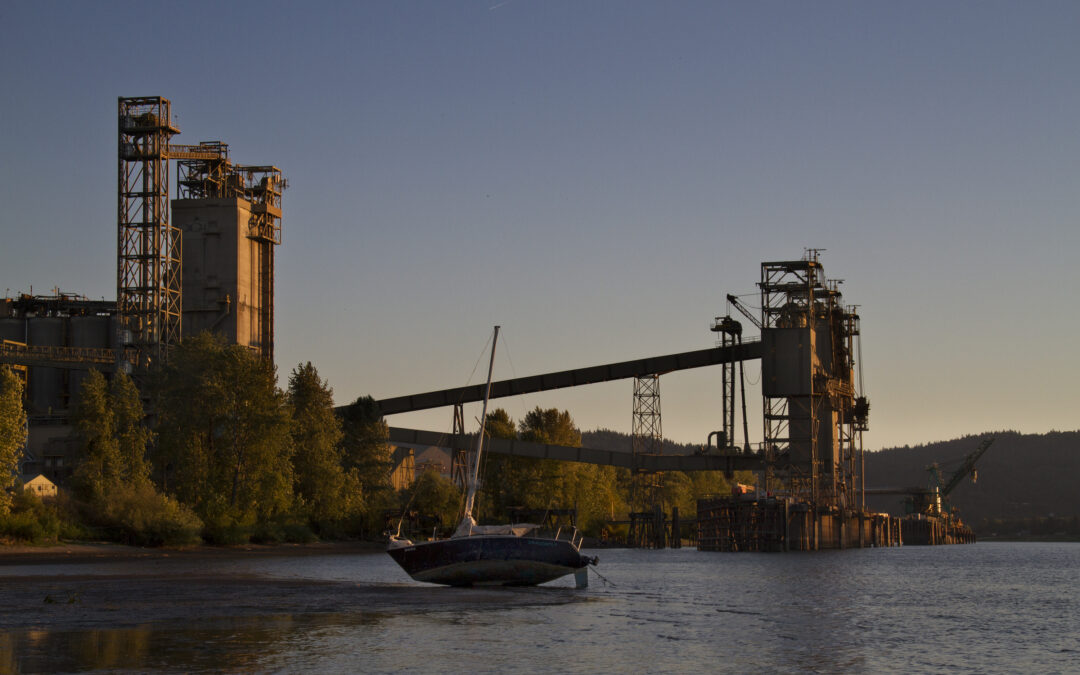 Saturday, Dec 14:  Discussion with Travis Williams, of Willamette Riverkeepers, concerning the current state of the cleanup and future plans for the Willamette Harbor. It’s free & open to the public.

The title of Jon Gottshall’s photographic essay is based on the number of industrial cranes set along the river from the Fremont Bridge to the mouth of the Willamette—the Portland Harbor. The exhibit consists of landscape photographs of Portland’s most industrialized and polluted corridor, the last 10 miles of the Willamette River before it merges with the Mighty Columbia. Portland depends on this stretch of the river to stay connected to the global economy. 65,000 jobs are either directly or indirectly supported by businesses along the harbor. For example, a total of $413 million in state and local taxes was generated by activity in the Portland Harbor in 2015.

The Willamette Harbor is served by boat, train, truck and pipeline. It is the home to Portland’s Superfund site, where toxic chemicals, such as petroleum distillates, creosote, heavy metals and PCB’s reside in the sediments along and under the riverbank. The river is also home, of course, to fish, birds and wildlife.

The exhibit explores important questions, relevant for this age of environmental crisis:
1. How will these issues, the man-made and the ecological, coexist in the future?
2. Can we remedy what the past has done while toxin-heavy industries continue to use the river today and for the foreseeable future?

On December 14th the artist and individuals from Willamette Riverkeepers will discuss the present and future state of the clean-up of the Willamette River.
Free and open to the public.